All young people have a powerful voice and a right to be heard.

We bring young people together from across the Lewisham community to create outstanding theatre in an environment of high expectations and collaboration. We work from the core belief that artistic excellence is key to expanding young people’s horizons and creating lasting transformation.

Who’s who at LYT

Our Council of Management members:

We are supported by a passionate and committed Council of Management (Board of Trustees) who provide governance, oversight and guidance on strategic organisational management. 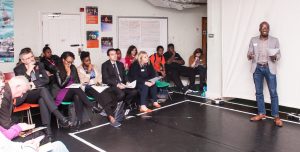 We are currently recruiting for new trustees to join our Council of Management. Find out more about these voluntary roles here.

Lucian Msamati: Lucian is an actor in theatre, television and film, a writer, director and producer. He recently played Salieri in the National Theatre’s production of Amadeus. Recent screen credits include Black Earth Rising (BBC), Kiri (Channel 4) and Game of Thrones (HBO). We’re looking forward to seeing him as John Faa in the BBC’s adaptation of Phillip Pullman’s His Dark Materials.

Keep Up To Date With LYT